Last night I went straight to the hospital after work as I do every night.  Carrie had left a while earlier to get Lylli and to pick up some clothes, etc. from the house because we were fortunate enough to get a room again at the in-hospital Ronald McDonald House for a couple nights.  When I got up to Gracie’s room, she was laying in her bed staring at her mobile -- she looked so comfortable and content.  For the first time in 16 days, it was nice to see that she didn’t seem completely drugged and out of it, it was also the first time in as many days ,that I was able to take her out of her bed and hold her.  It was very nice – just Gracie and I alone in her room.  We rocked in the chair and talked about her stay in the hospital and her upcoming trip to Boston.   Ok, I was pretty much the only one talking (although she was pretty chatty yesterday) -  like writing in this blog, talking to Gracie about what’s going on is somewhat therapeutic for me.  I very much appreciate the support from family and friends, but sometimes get overwhelmed with everything  and just want a little time alone with her to tell her how proud I am of her and to thank her for helping me realize I want to become a better man.   After about an hour of sitting, talking,  and singing to her, my phone notified me that my other girls had arrived.  I rock for a few more minutes until I could make eye contact with one of the nurses and wave her into the room to help me maneuver Gracie’s tubes and wires and get her back into bed.  I stood by her bedside for a minute or two as her eyes got heavy.
After I was convinced Gracie was once again comfortable, I went down to the Ronald McDonald house.  I opened the front door and immediately saw the girls, who had entered just before me.  Lylli assumed that I was in there already and was running ahead of her mother scanning the room for her daddy – I heard her tell Carrie that she didn’t see me anywhere.  Never assuming I would have gotten there after them, it took awhile, but eventually she turned and looked behind her and saw me -- she ran across the room yelling “Daddy!!!” and jumped into my arms.  Between my time with Gracie and the greeting I got from Lylli – For a short period of time, I forgot about any stress I had in my life.
Posted by rdelaney at Friday, February 25, 2011 No comments: 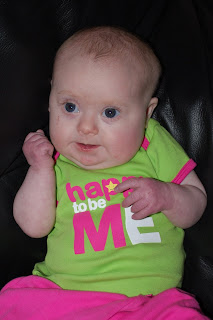