After a long sad Mother’s day, I headed to bed a little after 10 pm last night.  It was later than I would have liked given my planned 4 am wake-up time, but I just couldn’t make my way to bed because it meant that today (Monday) would get here sooner – that same sort of logic you use when you’re a kid.

Once I finally got there, I noticed my not so wonderful neighbors felt it ok to let their kids/grandkids that show up from out of nowhere every few weekends yell and scream late into the night.  But even without the added noise, I’m afraid I would have had a tough time falling asleep.  I have so much on my mind these days – I battled the anxiety that today is my first day back at work since Gracie passed away.  It’s so hard to be here pretending that I’m still not devastated by the loss of my sweet girl – I really miss her.  It’s a pain that may dull over time, but losing her has changed me forever.  Despite being worried about going back to my office filled with pictures of her, I was more worried about being away from Carrie today – this is tough on me, but as the mom, much tougher on her.  I don’t feel like I did her justice on Mother’s day – I can’t convey to everyone how amazing of a mother she has been to our girls – I know what people have seen from afar has been amazing, but let me assure you as the closest one to her during Gracie’s whole journey that the tireless and thankless things that she did every single day were even more amazing than it would appear – I am as proud of Carrie as I am of Gracie.  We are working through things in our own ways, and I try to give her space, but I do prefer to be close in case she needs anything from me.

To add to my already spinning head as I tried to fall asleep, I couldn’t help but think about my good friend who I learned was moved to hospice on Friday.  Several of us had left him voice mails and texts recently and hadn’t heard back from him – he was diagnose with a brain tumor 5+ years ago, the treatment went well and for a few years things were calm, but the last year or so they found some more growths and despite his character to not trouble others with his issues, it was obvious to many of his friends that things were getting worse than he lead us to believe – When I didn’t see him at Gracie’s funeral, I knew that things were not good.  He was in my wedding and, one of the few friends of mine to come and visit Gracie in the hospital in all of her stays.  Every time we would meet for lunch, I would ask how he was doing, but he would quickly switch the conversation back to how Gracie was doing instead.  He is a good friend, a creative type like myself – we always joked about starting a t-shirt company to sell shirts with stupid sayings – we even went so far at one point as to look at a setup someone had in their basement that they used for family reunions, etc on Craigslist  – we left the place to think about it over a couple of beers and we were all set to buy it, when we realized that we loved the idea of coming up with ideas, but neither of us wanted to actually do the work.  I wasn’t close to him growing up, but in my adulthood we have become pretty good friends.  We don't see each other all the time, but he means a lot to me.  I visited him on Saturday – he was pretty out of it.  I don’t have to tell you what hospice means, but it’s evident that it is only a short matter of time.  He was sleeping when I left, but before I did I asked him that if there is such a place as heaven, to please find my girl and make sure that she is taken care of – I’m sure he heard me and I know he won’t let me down.

With all of this going on in my head, I laid there and tossed and turned until 3:05 AM when I finally made the decision that I had to text my workout partner Chad letting him know that I just wouldn’t be able to make it to FXB this morning – I just hadn’t slept and the idea of getting up in 55 minutes and facing today’s kickboxing workout seemed impossible at the time – of course now I regret not going but just I just didn’t have it in me today – I know a tougher man would have sucked it up and been there, and I’ve tried very hard to get back to my routine, but I’m afraid, with everything going on, I’m not quite ready.  I’ll be there tomorrow though for legs and abs - I can only take things one day at a time right now.   Sometimes I think I’m not sure if I would’ve started this if I knew all that was going to happen during this time, but then I realize that for some reason I was drawn to that place and the added support and stress relief it is bringing me could not have come at a better time – without the structured program, I’m sure I would be in an unhealthy spiral, but for the most part FXB has been keeping me positive and on the right path – to me it’s not about the 10 week contest – I lost my chance at that a long time ago, but it’s about the lifestyle change, and remembering more and more each day how much better life feels when I am healthy – but most importantly for me right now is the daily reminder that when things get tough in the gym (and they do daily in FXB) as in life, as bad as you want to give up and quit sometimes, as long as you push on and keep trying and working hard, things will be OK.
Love ya 12
Posted by rdelaney at Monday, May 14, 2012 6 comments: 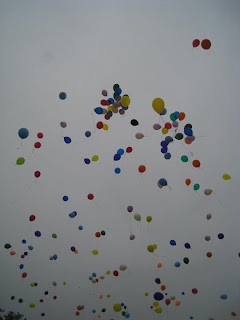 I was emptying my pockets from that day and found the words I spoke at Gracie's celebration of life -- I wanted to have a record of what I said before throwing the printed copy away, so I am including them here:

Last time I prepared something to say in front of a group like this was a year ago as we prepared to go to Boston.  I came up with pages of things to say about our journey with Gracie up to that point – we were very scared, but at the same time, very hopeful – this time was much harder, believe it or not, I'm kind of at a loss for words.

We want to thank you all from the bottom of our hearts for sharing in the journey with our Gracie.  I can't adequately convey to you how proud we are to be able to say that we are the parents of that little girl.  It is overwhelming to us to see all of the people that she impacted in her short life.  It's impossible for me to put into words what she has taught me.  She has made me a better man.  As cliché as this sounds – At night, in the sky there are millions of stars – most of them you can't see and the ones you do, look like they're staying in one spot – some brighter than the others, and once in awhile if you're lucky enough to be looking up at just the right time, you will see a bright star streak across the sky and before you know it, it's gone – often gone so fast that you are unsure even of what you have just seen – I know I'm biased, but I believe that Gracie was one of those shooting stars.

Many of you had never met her in person and I'm sorry you never got to see the Gracie that we knew.  She was not just the miracle baby hooked up to all of the tubes and wires that you saw in the pics from her hospital stays, but was a smart, funny, and charismatic little girl that we were so excited to share with everyone.  For those that didn't meet her, we didn't want your only memory of her to be in a funeral home in a coffin, so I ask that you take a look at the many beautiful pictures of her that are here today – She truly was as beautiful as she was strong.  I have needed to remind myself of her strength a lot these last few days and will continue to use that as the source of my strength in the difficult days, weeks, and years to come.

As difficult as losing Gracie is to us, we are very proud to be able to say that we tried everything we could to give her the life that she deserved.
Posted by rdelaney at Thursday, May 10, 2012 No comments: