A Life With Grace

I had limited exposure to people with Down syndrome, up to a certain point, in my life.  I have a couple of amazing people in my extended family, but admittedly had not take the time to get to know them like I should have.  My wife is a special education teacher, so as I got to know her, I was exposed to some of her students, etc.  Her good friend/co-teacher's son was born about 6 months after we started dating.  I went with Carrie to visit them in the hospital.  Will was beautiful.  I think it was seeing someone with Down syndrome as a newborn baby that sort of started to change my thinking.  Even earlier in our courtship, before there was ever thought of us turning into a long term thing, Carrie had been exploring the idea of adopting a little girl that she knew with Ds.  It wasn't to be – in the end, it turned out that the girl didn't need a home after all.  As things got more and more serious, Carrie informed me that some day she wanted to adopt a baby with Down syndrome.  She repeated this often, and I heard her, but admit, most of the time, I ignored her.  While we were engaged, we spent quite a bit of time with one of her students.  She was from a single parent home – her young father was admittedly overwhelmed with raising his daughter.  She would occasionally spend a night or two, but there were a couple occasions where she spent a couple weeks.  I fell in love with that little girl – she was a little spit fire and knew how to charm a room.  Everywhere we would go, I was amazed to see the smiles that she would bring to everybody's faces, not to mention mine.  We even spoke seriously about adopting her if she ever needed a permanent home.  For two years, I played Santa Claus at the Miracle League Christmas party.  For many of these kids, I was the first Santa they had seen in person because a crowded loud line at the mall can be a bit too overwhelming.  I really loved doing that and for the most part managed to keep my beard and glasses intact.  But I do have to say, the most memorable kids to sit on my lap and tell me what they wanted for Christmas were the kids with Ds.  Between the people that I'd met, time spent at Carrie's school events, Miracle League games, and  Down syndrome walks, I was no longer as afraid of Down syndrome as I had been in the past.  Don't get me wrong, I was certainly not yet in agreement with Carrie when she repeatedly reminded me that someday she wanted to adopt a child with Down syndrome.  My standard answer after we got married was "Let's just see what happens naturally" – of course this was in attempt to buy time, hoping that after having some kids, she would forget her plan.  Never in a million years did I think that we would actually give birth to a child with Down syndrome.  I mean what are the odds that she and her coworker, both special ed teachers, working side by side every day, would both give birth to kids with Down syndrome.  We should have known right away that Gracie was an odds beater, because on November 22nd 2010 – exactly 5 years to the day after Will was born, we became the proud parents to a little girl with Down syndrome.  The days leading up to her birth were much different than most families – early on she was given a 3% chance to be born and her diagnosis of Down syndrome changed her odds to 50% -- her heart was pretty messed up, so that was our main concern.  We knew beyond the shadow of a doubt that if we could get through the journey needed to get her heart fixed, the Down syndrome part was going to be a piece of cake – a lot of parents are faced with fears and tears when they become parents of children with Down syndrome.  We knew there would be challenges, but we were so excited about and determined to get that chance.  We love that little girl as much as any parent ever loved their child – if I could change places with her right now, I would without the slightest hesitation.  I can proudly say that we did everything we could to give that little girl the best chance at an amazing life – We sought out the best doctors, surgeons, and the best therapists – She was so beautiful and bright - So much more than just a sick little girl – so much more than what most people got to see.  Having Gracie  has changed me more than anything in my life.  I cannot begin to describe to you how proud I am to be able to tell you that I am her father.  She is and will be with me through every remaining step of my life and will continue to be just as much a part of my family as any of my other kids.  I can't begin to tell you all that she has taught me.  She has made every single person in my family a better person by having her in our lives.  She taught us so much about courage and strength and what we are all capable of.  We could never replace Gracie in a million years and would never want to.  We miss her every second of every day and have so much to be thankful to her for, including giving us that distinctive status of becoming a family with that extra chromosome – and if I can say, a damn good one.  It's because of that, I'm excited to say that we have started the process and paperwork to find and adopt a baby with Down syndrome.
Posted by rdelaney at Wednesday, November 21, 2012 3 comments:

Tangled Up in Gray 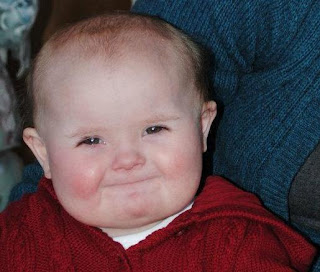 It's gotten way too late on this Sunday - everybody else has retired for the night.  I turned the TV off awhile ago, but I just can't get myself to stand up and go to bed – I admit, I dread Monday every weekend, but I've especially been fearing this week for some time. As I sit here staring at and talking to the pictures of my daughter on the wall under the shelf with her remains next to the electric candle that we keep going 24x7 in her honor, I'm thinking about how earlier in the evening I was looking over my wife's shoulder as she put the final touches on this year's family Christmas card.  Since May 1st, the toughest question I am asked is "how many kids do you have?" – it was such an easy question before that day.  There are so many things that changed and have become more difficult the moment we lost Gracie. I'm also thinking about the time we spent at Target today -  Despite the fact that we haven't yet even had Thanksgiving, the store was filled to the brim with everything Christmas – I'm usually all about the commercial aspect of the holidays – I love getting and giving presents, drinking hot butter rum, and eating way too many cookies, but this year, everything is different – and I guess now that I'm thinking about it, that's kind of saying a lot considering last Christmas was spent in Boston.  Our Christmas dinner was a hodge podge of microwavables and snack foods bought from behind the desk of the hotel lobby – Santa was so kind as to deliver gifts to Gracie's room because Christmas was only a few days after her final heart surgery – The surgery that finally fixed her heart – my sweet girl Lylli, still so happy to unwrap her gifts sitting on a window bench seat, silver bells and a three year olds carefree Christmas morning replaced by limited visitation surrounded by the beeps and alarms of the ICU - watching Lylli propped up on a stool leaning against the side of Gracie's bed happy to be watching cartoons with her sister on the goofy tv that resembled a dentist light hanging above - But the most important thing was that we were together – These last three holiday seasons have taught me more than any previous about this life.  Gracie was born in November, we got out of the hospital the day before her first Christmas, we weren't able to bring her out to see our family and friends that year.  This would have been her third Christmas, but the first one where we weren't dealing with pending or recovering from surgeries – the first one where we would have brought her out to see everyone.   I was really looking forward to all of my kids having a normal routine this year and will always regret that she never got to experience one.  Speaking of Thanksgiving day this Thursday, it would have also been Gracie's 2nd birthday.  A day that has been causing me more and more anxiety every day as it approaches. I will do my best to make it a happy day, but I'm afraid it's going to be a tough one.  This blog post was not meant to be a whoa is me sympathy plea – I wrote it because the best thing I can do to honor my daughter is to share what I have learned from her, so to anyone that will listen – As you prepare for your turkey day celebration and the pending holiday season, I just want you to try to remember that it's not about getting the most expensive Barbie Castle that you can find or about how many events you can fit into each day, it's a time to give thanks and enjoy the greatest gifts of all – your kids, family and friends.  I've always said that the toughest lessons you learn in life, you learn after you can use what you learn from them – I guess that is true for the incident that taught you that lesson.  But life is full of "If I knew then, what I know now" moments – and I'd like to suggest something based on what I've learned,   Take some time over these next days/weeks/months, a real moment to sit with your kids/loved ones and hold them and tell them how important they really are to you and to tell them how proud they make you – take a step back and really feel how blessed you are to have them to share times like these with because you truly never know what tomorrow will bring and if God forbid, that day comes where they are no longer around, you will regret every single kiss you didn't choose to give them.

I wish everyone the happiest Thanksgiving and holiday season
Posted by rdelaney at Monday, November 19, 2012 7 comments: