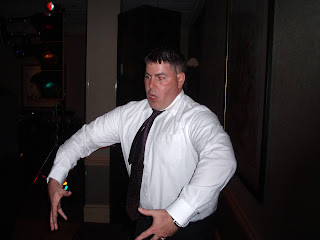 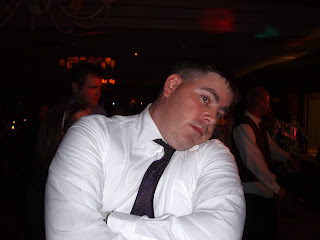 I should just start every post after a certain amount of time between posts by saying that I, once again, am at that point where I don’t even know where to start.  May 2012 was the hardest month that I’ve ever had in my life.  I started the month by saying goodbye to my amazing Gracie (and will come back to post about that when I’m ready).  We had a celebration of her life on Friday May 4th – a beautiful afternoon in the park (the same pavilion where we were married).  Hundreds of people stopped by to say goodbye to our girl – it was everything that we imagined.  The day was kind of a blur - there were so many people to talk to – but I noticed the obvious absence of a good friend.  Jayme was in our wedding in 2007 – I have decided to not post pictures of that day in this post because he was bald that day due to cancer treatment and I know he was uncomfortable during that time – So just over 5 years ago, he started his battle with brain cancer.  After the initial radiation/operation/battle they had everything held at bay.  The sensitive location made it impossible to remove the tumor, but they were optimistic that they had it under control – he followed up on a every so often schedule to check to see that things were OK and then awhile ago, they found more tumors.  I can’t say that I know all of the details and am kind of ashamed to say that – I guess I’d been so caught up in everything that we had going on with Gracie in the last couple years, that I didn’t dig too deep when I spoke with him.  I admit, due to my priorities, I took a step back from all of my outside relationships.  We exchanged emails and went to lunch several times in the last couple years – he was not the type to burden you with his problems.  I admire that about him – I am in a lot of ways, the exact opposite – people know when I’m going through things.  I guess I’m a drama queen.  I would always ask how he was doing, he would go into a little detail and then quickly say “but that’s nothing compared to what you are going through with Gracie” and turn the conversation back to her.  I would respond with “that’s not true”, but I didn’t press it at that point, because I knew he would rather not go there.  What a wonderful man – he knew he was dying, but didn’t want me to worry about anything more than what I already had on my plate.  Some people are best known by the things they say and people like me apparently try to get as many words out as possible – you know, throw it against the wall and hope something sticks – ie this blog.  But Jayme was the opposite – he didn’t have to say a lot.  Don’t get me wrong, he knew how to get the job done.  He single handedly grew a division of a company with no presence in the area into a very successful business.  He was a harsh negotiator and all business when he needed to be, but that had a time and a place – the rest of the time was using himself as the butt of a joke.  Where some attempt humor by talking, Jayme was the master of silence – he was one of the funniest people I knew and thrived on making people think he was serious when he wasn’t – someone at his funeral talked about his love of putting on socks with sandals and a “What you talkin’ about Willis?” t-shirt and then walking up and down the Vegas strip making people think he thought he looked good.  I had tried to call and text him a few times in the weeks before Gracie’s death and had not gotten a response, when I didn’t see him at Gracie’s celebration, I asked a few others that were close to him and they hadn’t heard from him recently either, we came to the conclusion that something had to be up – The next day, I started attempting to prod everyone that might know for more info and as suspected, one week after Gracie’s funeral, Jayme was put into Hospice.  I went to visit him on Saturday, May 12th – he was weak and very tired.  A few of us hung out in his room for a couple hours, Jayme waking up once in awhile and adding in a one word response before falling back to sleep – We proudly continued our conversation of goofy stories all knowing that he could hear us and would appreciate the laughter as we reminisced about old times – When I left that day, he was pretty much sleeping, I crouched down next his bed and told him that it had been a good run, that I loved him, and asked him that when he got there, to take care of my girl.  I didn’t go back to see him before he died two weeks later – I regret that I didn’t go back, but I said what I needed to say and didn’t want to fuss over him – he wouldn’t have wanted that – OK, I admit, it was just too much for me at this time.  This past Saturday, I got the honor of being one of the pall bearers at his funeral.  They sang Amazing Grace at both the funeral and at the Cemetery.  I believe it was his way of letting me know that he indeed is with my girl and will make sure she is OK until I see her again someday.  It was a beautiful funeral filled with beautiful tributes from his closest friends, but was a very difficult day - I hope he knows what he meant to me – I will miss him very much.
Posted by rdelaney at Monday, June 04, 2012 1 comment: