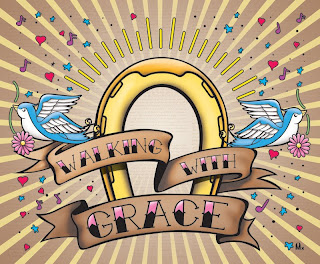 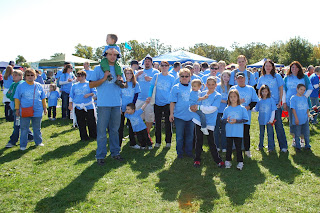 Last year at the Step Up for Down Syndrome walk, 85 people joined us on a beautiful day to celebrate what was at that point an uncertain future for our unborn baby.  Since that day, Gracie has arrived and though we've had some scary times, we are happy to say that her future looks bright.  The support of our family and friends (and friends of friends) has been so wonderful.  We invite you to join us this year to walk as part of "Team Walking with Grace".

The walk, this year, will take place on September 25 at the Midway Picnic Pavilion at Como Park in St. Paul.  The walk itself officially starts at noon, but the area is full of booths and kids' activities that get started way before the actual walk.  We would like to invite everyone to come early (anytime after 9 AM) to enjoy some breakfast treats and visit, checkout the other activities, and of course see our Amazing Gracie.
We will provide a "Walking With Grace" t-shirt to those that do not already have one.  Please remember when you RSVP to this event to include the shirt sizes of everyone in your group needing a shirt. 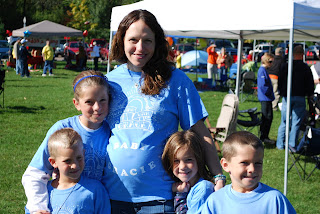 Your response to the evite is important so we can be sure to have enough food and shirts for everyone.  Here is the link to the evite: http://new.evite.com/services/links/T7MGQUS4DY
there is no need to officially register for the walk (through the DSAMN.org site), it's very informal, just let us know if you plan to join us so we can plan accordingly.  In order for us to get the shirts in time, please RSVP with numbers and sizes by September 4th.
We are hoping to take a picture of our whole group at 11:30.
Also, for those that would like to join us and do not want to walk – that's no problem.  We will have a popup canopy and chairs, etc – There are many people that don't do the walk – the event has plenty to do without it.

Here is a link to more information about the event:      www.dsamn.org/stepup
Thanks again for all of your support over this past year – we hope to see you at the Walk
~The Delaneys 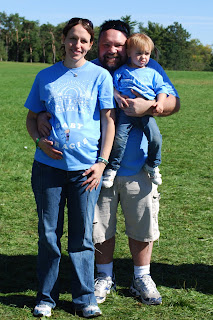 I admit, this blog goes in so many directions (kind of a lot like the writer).  When I first started posting, it was just after the birth of our first daughter, Lylli – the goal was to chronicle my attempt to get healthy and become a good dad.  I got caught up in any number of other things and once again slipped further down the path of not being able to buy clothes off the rack (and to give you a hint, I haven't gotten any taller).  The theme of my posts moved quickly into bathroom humor aimed at the couple of high school/college buddies and their coworkers that I knew followed it.  Then suddenly, we got news about our second daughter very early in the pregnancy having Down syndrome and a congenital heart defect.  I can't say I ever imagined being the father of a child with a disability – That's just one of those things that happens to other people.  So then, I started posting my thoughts about how my new life would be with Gracie in it.  Other people started following it – to be honest, it even forced to go back and delete some of my rants about stall #3 in the office bathroom and my view on the cons of the horseshoe toilet seat.   Then Gracie was born this last November and the doctors told us she wasn't going to make it – I had times when I posted something almost daily and other times where I rarely posted (for instance when my wife was reporting all of the details on Gracie's caringbridge site  - for those interested see the link on the right side of the blog) – Gracie had two major heart surgeries in Minneapolis to "buy her time" and despite the skepticism of the doctors in Minneapolis, in May we went to Boston to the best surgeon there is and he fixed her heart – It truly was a miracle and the support from our network of family and friends was amazing.  I am a very thankful and blessed man.

For those that follow this blog – Because of what we've gone through this last year, you know that I've come to the realization of "What kind of dad would I be to continue to live a life that ruins this perfectly good heart that I've been given when Gracie has had to fight this hard just to have a life because she was born with a bad heart?" – So my buddy Dave calls me up awhile back and asked if I want to do the run this year at the Twin Cities marathon – we both have done the 10 mile race that day in the past and he knew I was very disappointed the last time did it.  So I told him, heck yeah!  I was bound and determined to run the Twin Cities 10 mile somewhere between the 9 minute pace I ran at the first year they had it and the 12 minute per mile pace I ran a few years ago at almost 300 lbs.  I talked to him a couple days later and he informed me that he was talking about the full Marathon – Holy Crap!  I couldn't even run to the mailbox without a break.  My guardian angels swooped in and offered me up a coach that has outlined my training and I have been running 4-5 days a week for about a month and a half.  I still can only run probably at most a mile before needing to walk, and most wouldn't even consider my running pace, running, but I feel myself getting better every day.  I bought and had to return a Garmin 405 gps watch because my wrists were too big – but found an earlier model (the 305) that works with an extender band – I'm so used to running (ok mostly still walking) with my iphone playing music in my ears, but have recently gone out on a few runs without it now that I have the watch to "pace" me.  When I get to a point where I want to give up, I think of my girls and sing "Fix You" by Cold Play in my head – that finally brings me to the reason for tonight's post:
As I make my way on this journey to become healthy, I've stumbled across many blogs – most of them are either a parent of a kid with a disability or someone in their own pursuit of being healthy.  One blog is from a guy name Travis Colby (http://finallyairborne.blogspot.com/) – Travis was kicked off a ride at Disney because of his size—that was his tipping point – he's a former fat guy turned fitness fanatic journaling his weight loss journey and multiple marathons, etc.  One day he posted the youtube video of Ben Davis –  I believe I shared it on this site the same day – I still, watch this video fairly often – I can relate so much to what he was feeling -- the montage is to "Fix You" by Cold Play – I hope to have a montage of my own like that someday -- heck I've started taking the bus to work – the other day I found myself in the back seat in tears watching the video on my iphone – Ok, I wasn't sobbing, but I had to quickly turn it into a yawn to hide the fact that I was so emotionally effected by something I was watching.  Ben promised his grandma over Christmas of 2008 – that he would face his depressed and unhealthy life head on – in fact, his blog www.bendoeslife.com , I believe was originally created for her to keep tabs on his effort.  Since that time, he has lost 120 +/- lbs, has finished multiple marathons, as well as at least one ironman (with his dad, Pa, and brother, Jed) – they are all currently training for another.  It's this blog where I believe I originally got the statement that Pa told the boys – "You don't see old fat people" – That really hit home -- I use that line all the time now and think of it quite often since I'm almost 300 lbs and just over a year shy of 40 with 2 year and 7 month old daughters and plan to keep trying until we have a boy – I plan on being around for these kids for a long time and in order to do that, I needed to make some changes.   All three of these guys are spending the summer travelling across the country in a station wagon, to spread their theme to "Do Life" by hosting a series of free 5k's  www.dolifemovement.com – check out each of their blogs on that site.  I religiously follow them now and I wanted to encourage the masses to do the same.  Next Thursday, July 14th, they will be in Minneapolis  for one of these 5K's  http://dolifetour.tumblr.com/post/6055649788/minneapolis
I wanted to encourage you to join them/me – please don't be intimidated if you're not a runner – even if you just want to get some motivation to get started on a similar journey – many people walk it, there are people my size and bigger as well as seasoned runners.  The emphasis is not about how fast you finish the run.    Details about the 5k are on the dolifemovement site above.   I contacted Eric Perkins at Kare 11 hoping he'd do a "Perk at Play" segment about their tour this summer and maybe join us that day – he responded asking when, but I don't know if he contacted them.  Anyway – they are asking that we spread the word -- so I am!
Posted by rdelaney at Friday, July 08, 2011 1 comment: