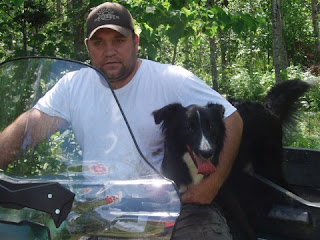 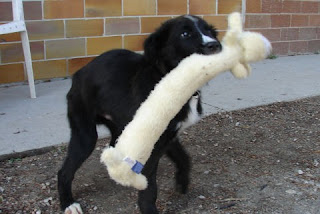 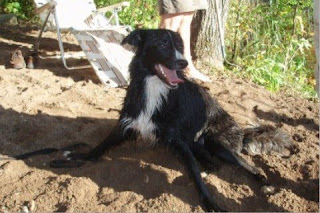 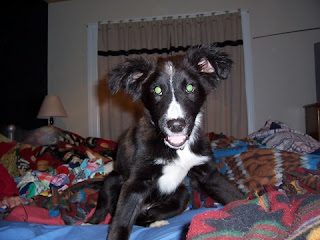 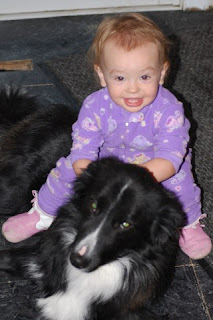 I've been involved in Dog rescue for many years.  I've had many foster animals in my home.  Carrie and I have played Santa and the Mrs several times for the pet rescue events over the years.  I've even been a board member for group.  About four years ago, I stumbled upon a puppy in with Cerebellar Hypoplasia that had been in a kennel his whole life.  He was one of a litter of collie X's - half of which suffered from this condition.  My heart sank for this little guy – the last of the litter to find a home --  he was overlooked by everyone and after learning more about his zest for life, I couldn't let him spend another day alone in a kennel.  Despite having several dogs of our own, Carrie and I brought him into our home.  We changed his name from Tipsy to Bodey (felt demeaning).  I must admit that I may have been thinking more with my heart than my head.  Many people still ask me why this dog has not been euthanized, but if you could see his smile, you'd understand.

He is potty trained (maybe an accident once every couple months just because it's hard for him to get out by himself at our home).  He loves everybody, especially kids - not to mention everybody that meets Bodey, once they get past the goofy gate, can't help but smile because he gets so excited to meet people.   I have been struggling with what is the best for him for awhile now -- unfortunately, our home is not set up the best for him and I find that he often gets lost in the mix sitting in a corner because he can't get around very well - he does a bit better in the grass, but as he grows older, he is becoming less and less mobile no matter what the terrain.    I wish we could pack up and move somewhere better for him, but given the economy and our current situation, moving is not an option.  If it was just a matter of the physical environment, we could probably make it work – I mean, we have to this point.  I sometimes wonder about his quality of life – I guess I had these grand illusions that he would just walk a little different, but still be able to get around – I wonder how he feels these days laying in the same spot for hours at a time until we pick him up to move him to the next spot that he will most likely lay in for several hours.  He isn't a small dog either – so carrying him around is a bit more challenging than if he were a yorkie.  I know that Carrie is concerned about the amount of effort it takes for her to move him while she is going through this volatile pregnancy – she shouldn't carrying him outside, but when I'm not there (she is the first to get home by an hour or two everyday) she can't just let him sit there after laying inside all day -- He's gotta go outside just as bad as the rest of them.  I can't risk anything happening to Carrie or the baby.

I am so torn on what to do with Bodey – I've had to make decisions to have amazing animals put down because of owners that say they will give an animal a home and then decide because things change they no longer have a place in their home.  We have three other dogs that we're not getting rid of – Bodey is the one with the most special needs.  I think about the fact that soon, I will be the father of a girl with Special needs and will I love her any less because of it?  Absolutely not!  I feel like such a hypocrite considering sending Bodey to an animal sanctuary to live out his life?  I just know that when Gracie arrives, we will be relying on family and friends to take care of our animals while we spend the many hours at the hospital – Asking them to Let the dogs in and out and give them food and water is much less demanding than asking them to carry Bodey out and in and if he steps or lays in his waste to wash him up and carry him back in.

"Home for Life" is an animal sanctuary in that takes in animals to live out their lives – most of these animals have special needs.  It's a great place, in theory, but after we toured it, we felt that it would definitely take 2nd to a home with a family.  However, they do work with the animals with mobility issues and have a staff there 24 hours a day.  Bodey is a lot of responsibility – when we toured the facility a couple of months ago, we both agreed that Bodey would be one of the most involved animals at the sanctuary.  At the time, we decided that we couldn't send him there and needed to make him work in our home – but since then, as Nov 25th approaches, I don't think we can do it much longer.  Of course, there are financial considerations for this option – this would be a minimum of $100 a month to send Bodey to live there.  Well worth the money, but I struggle to make that commitment as well considering all of the unknowns that we face with Gracie – Carrie may need to take a leave from work – which would make us a single income family – the $100 a month in that case could help a lot towards our family's monthly bills.
Posted by rdelaney at Friday, September 03, 2010