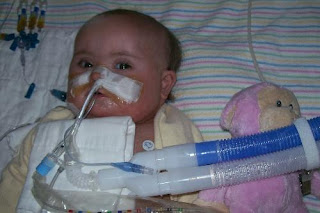 For those of you that follow Gracie's Caringbridge site, this post may be a bit redundant because I am going to steal some of Carrie's posts.  But there are so many people that have approached me and asked about Gracie, I thought I would give a quick recap of what's been going on this week.

Recap of Saturday:
Gracie had a cold for a few weeks, but at the end of last week it has turned to pneumonia. She was on antibiotics for a few days after a visit to her family doctor, but her breathing got a little too rough and her oxygen needs too high for us to be comfortable with her at home. So, on Saturday morning we brought her to the ER at, our home away from home, Minneapolis Children's.
She didn't respond to her initial antibiotics, so they were thinking it was probably viral, which makes it tough because you can't really fix it, you just have to WAIT. She was on 3 liters of oxygen and her sats (oxygen saturations) were still only in the upper 80s to low 90s – She was very crabby for a couple days and was getting worse – it was obvious something was really wrong.  They did several nebulizer treatments to try and get her breathing to be easier.

Recap of Sunday (Carrie's whole cb update):
What a day! Not one I care to repeat any time soon! Gracie continued to do ok through the night and, with the help of some meds, even slept. But, around 4 am, her breathing and sats got worse. She was working very, very hard to breathe and even with 5 liters of oxygen going up her nose, her sats were only in the 80's. So, they decided to intubate her. They put her on the ventilator this morning around 8:00. With that came sedation meds to keep her calm and, although we really hate seeing her on the ventilator, she is much more comfortable.
Around the same time, the nurse noticed that her pupils were very different - one was big and the other was very small. Yikes. They took her downstairs for a head CT to make sure everything was ok. They didn't find anything on the scan, which is very good. The theory is that when the doctor put a central line in Gracie's neck, she irritated a nerve that caused her pupils to react. They still haven't gone back to normal, but no one seems worried about it.
THEN - as if that wasn't enough for a day - her labs showed her potassium levels were really high and she hadn't had a wet diaper for a long time. Something was happening with her kidneys. They did a kidney ultrasound that showed her kidneys were swollen. Nobody knows why they were not working, but they needed to start working to clear the potassium out of her system. If potassium gets too high it can make the heart stop. The next labs showed her levels even higher - critically high. They gave her several meds to lower her levels of potassium and some interventions to get her to pee and now, finally, she is peeing a little and her potassium is within normal limits. They even had the IV in to allow them to do dialysis, but - knock on wood - it doesn't look like we are going to need it.
What a day. We were pretty worried and stressed this afternoon, but things are looking better now. She is still on the ventilator with lots of support, but her sats are getting better and her blood gases are great. Hopefully they will even be able to wean some of the ventilator settings soon. She is definitely not out of the woods yet, but I feel like I can breathe a little now.
The good news is, her heart is doing good :) Ironically, all of this has nothing to do with her heart. It is a little more stressed, but it is understandable with all she has going on.
Thank you so much for your thoughts, prayers and words of support. It means a lot to us. I really hope my update tomorrow will be much more boring

Monday (Carrie's CB recap):
Gracie had a much better day today. She is still pretty sick, but things are going on the right direction. Her potassium is still low - they might even have to give her some to keep it from getting too low. She is peeing lots now. Apparently the kidneys get "stupid" when they are recovering and they forget to hang onto anything. As part of the healing process they are going to dump out anything that goes in. So, we have to be very careful about making sure she doesn't get too dehydrated. It is a delicate balance of making sure she has just the right amount of fluid in her body.
Gracie is still on the ventilator and probably will be for a while. She has lots of junk in her lungs that needs to get out before she will be able to breathe easy without the ventilator. They have been able to wean the oxygen down from 80% to 40% and some of the settings have been weaned so she is getting less support.

Now:
So the last couple of days have been about the same – nothing too exciting – her mascot is the tortoise during these stays – slow and steady.  Gracie is still critical, but her kidneys are slowly getting better.  She'll probably spend a couple weeks in the CVCC at Children's.  I'm hoping that she is off the ventilator soon – yesterday she was awake quite a bit and for the most part was relatively calm.  It's so nice to see her with her eyes open and calm.  I know it's just a matter of time before she turns back into the spunky Gracie that tries to rip the ventilator out – It's a battle for the nurses, but that fight has gotten her where she is today (I try to think about how tough she is when my mind is telling me to stop during my workouts).  I will never get used to seeing my child on a ventilator and for those of you that have seen yours, you know how devastating it can be to see that silent cry and not be able to do anything about it.  The last couple of days were tough on all of us – I think Carrie said it best – the adrenaline of how serious things were over the weekend has now worn off a bit and we both kind of got to that angry phase.  This poor little girl has been through so much in her short 17 months of life.  After all of these ground breaking, life saving heart surgeries she's been through – the latest in Boston over Christmas and now she's in critical condition in the ICU because she caught a cold.  Enough is enough!!!  But I couldn't be more proud of how tough she is.  And speaking of proud – I can't do my wife justice when I attempt to put into words what she does for our family – she says I'm too wordy, so the best compliment I can give her is to keep it short, but I am amazed that at 35 weeks pregnant, she, without complaint, stands/sleeps next to that hospital bed just in case Gracie opens her eyes so she knows that Mommy is there – I am a very lucky man.  Let's hope Gracie comes home before the arrival of our son – that would add a whole new level of complexity!!!
My last post was about my first week at FXB.  I was not able to make it last Saturday because of Gracie's condition – I gotta admit, my inner 3 year old was a little jealous of those that got a perfect attendance sticker on their check in card for last week.  I was able to make to the 9:30 class on Monday and have figured out a solution for someone to watch our other daughter, Lylli, so I can go to my normal 5 am class.  I'm burning the candle at both ends these days, but am determined to not let any excuse to sidetrack this effort.  As long as I'm not denying my highest priority, my family, during this difficult time, I will find a way to get there – FXB is the tool that I am using to make sure that I am around for these guys for a real long time.  Wish me luck -- I am adding another level of complexity for a week starting today – I have to carry the 24 x 7 on call pager for work.  The last thing I need to do is add more stress these days, but whatever doesn't kill me, right?

Thank you for all of the people that have found this blog – the support has been great!!
Posted by rdelaney at Wednesday, April 25, 2012