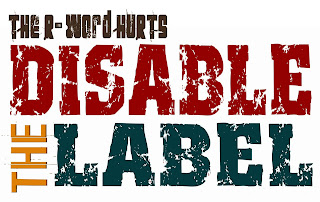 I was watching the show Parenthood earlier this week -- there was a moment during a scene in a grocery store where there was a confrontation that resulted in the unpleasant fella in line referring to the boy with Autism as the r-word. The dad on the show slugged the guy – I became completely full of adrenaline. It was the first time I could somewhat relate to the dad on the show as a dad (to-be) of a child with a disability (and she's not even here yet!) - I'm not really sure what I would have done, but pretty sure the guy wouldn't have said it again.

My point is... I was reading the blog on www.deedahandme.com this morning and the following statement got me thinking about this:

"There are a lot of people breaking down walls for our children. One of the ways this is happening is the confrontation of the language used to describe people with intellectual disabilities–the battle to end the use of the r-word. "

They go on to mention the speech that I linked to awhile ago on my blog given by Soeren Palumbo regarding the use of this word (http://daddythefatty.blogspot.com/2010/08/very-well-said.html ).

If you hear people using these words – Don't ignore it - say something! Also, if you use them yourself - think about how the way too common use of this word is very offensive and painful to many people - many of which are not even able to defend themselves. Not that it'll stop me from speaking, but I sometimes think I should refrain from saying some things these days as they become clearer to me as we begin the journey with Gracie in our lives because I do understand that there have been times that I've said and done things in the past without prior consideration of how truly offensive they could be to another person or group. There's nothing I can do about things I've said in the past, but I can change. That makes me think of something - In the past, as many immature males in my similar situation do, without giving it a second thought, I would say "that's gay" in reference to something that I didn't like or thought was un-cool. I am not proud of this, and will do my best from now on to speak without using words that offend. I understand this is not a perfect comparison to the r-word because the word "gay" is not a derogatory term when used alone like the N-bomb or R-bomb, but for my illustration, I'm talking about using a term in a statement that negatively generalizes someone or a group because of something they have no control over. "That's Gay" when used in society today is used to mean something negative but, for some reason most people, when they hear the phrase, won't even blink. My aunt is a lesbian and I didn't let that stop me from letting that phrase come out of my mouth every once in awhile when I was younger – no more – In all actuality, it's sort of ironic, because when I think about it - my aunt and her partner are two of the most amazing people and contribute way more to this society than most people I know – they are both beautiful, intelligent, and artistic. They are both passionate about their careers and spend much of their time at and away from work doing things that help many people – they both give way more than they take and I wish I was more like either one of them in so many ways. Being gay does not define either of them. It is a very small part of who they are, but it certainly is not negative. I mentioned that to illustrate that I do admit to have said things in the past without thinking that I am now ashamed of and to attempt to segway into something that happened yesterday. A very good friend of mine came over to help me with some work around the house – as we were BS'ing, he did something without thinking and said "I'm such an" r-bomb. I replied with a "hey now!" – he turned white as a ghost. The subject quickly changed – he called me later to apologize – I told him to not apologize to me and to just try and consider what he is actually saying – He is an amazing friend and the type of person, husband, and father that we all strive to be. He cares for other people and is honestly one of the greatest guys I know - I know for a fact he never uses that word and I'm pretty sure he will not do it again -- For some reason in most of society today, it's OK to use that word – but really it's not OK, it's as offensive, if not more, than any word that you can think of – so please, if you hear it, say something (be nice about it at first – I doubt an eye for an eye response will work in this case) and if you use it without thinking, please stop. It all starts with us.

Let me end by including something I took from the top of the www.rword.org website: