Last week before I left CHB (Children’s Hospital of Boston), I saw this on a corkboard near the elevators: 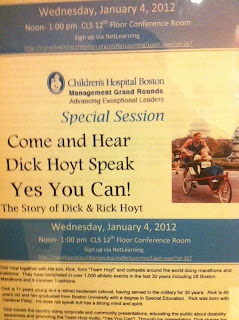 I was pretty bummed because I knew I would be flying home a week early and would have loved to go see Dick Hoyt Speak.


For those that may not have heard of Team Hoyt: Dick Hoyt has a son named Rick. Rick, (taken from their site) due to oxygen deprivation at birth was diagnosed as a spastic quadriplegic with cerebral palsy… When he was around 15 years old, Rick told his dad that he wanted to run a local 5 mile benefit run for a Lacrosse player that had been paralyzed. Although coming in almost last place, Dick pushed Rick in his wheelchair the whole 5 mile race --- (again from their sight)That night, Rick told his father, “Dad, when I’m running it feels like I’m not handicapped” – This started what has been decades of and thousands of races including several Ironman’s. Their story moved me before, but now that I have become the father of Gracie, I can’t even tell you how much their story means to me – I’m honestly tearing up right now trying to type this………OK – I got myself back together – if you haven’t watched this youtube link below, I urge you to – I am at a loss for words on how to explain it


All that said, my amazing pregnant wife, after the doctors took Gracie away this morning to remove her broviac tubes and do a sedated echo, sprinted across town to the building where he was speaking – walked in with only about 5 minutes left into a room full of people wearing suits and ties, stood in line and told him about how we, too, are parents of a child with a disability and how much an inspiration he is to me and that I wish I could’ve been there to see him speak. He told her to wish me the best of luck in my efforts and they took a picture together. It means so much that she did that for me. I’m a lucky man!!! 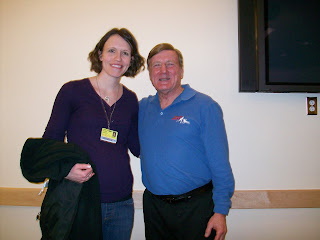