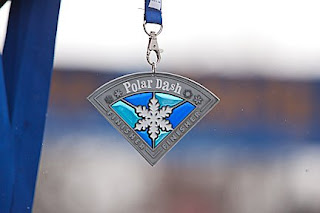 To the self righteous family sitting one seat in front of me on the school bus back to the parking lot following the Polar Dash 5k/10k/ half-marathon – When I first saw you, a mother and father in your 50's with what I assume was your fresh from college son, all together wearing your 10k finisher medals, I thought to myself that I hope this is something that I can do with my family when I am your age - But then I heard you speak – "I come up over this hill and there I see all of these large people walking the 5k – why even bother?  What are they getting out of it?  What a waste of money – they should just go for a walk somewhere" says the dad.  The mother replies with "they got a fleece out of the deal" – they all three smugly laughed.  The shots about the walkers started in the line waiting for the bus and went on throughout the whole ride -  They never even had the decency to look around at who may be overhearing their conversation - I wasn't eavesdropping -- they were sitting in seperate seats and it wasn't quiet.  I was on the edge of my seat directly behind them biting my lip as hard as I could.   Let me tell you something folks – you are very lucky that I have also decided to be a better person this year because it took all that I had not to interrupt with my 2 cents.
Yep – I walked the Polar Dash 5K on new year's day.  Did I want to walk it?  Nope – I did because I made a promise to my family that starting that day, I was going to turn my life around – I had a very bad cold and was wheezing without doing anything.  Add to that that I am 300 lbs and far from where I want to be - but I got out of bed around 6 am scraped the ice off my car and warmed it up – packed a bag for my three year old – woke her up and carried her to the car, tried to give her a little breakfast and brought her to my brother's place so he could watch her.  From there my sister-in-law joined me.  She easily could have run the race, but vowed to be there to walk it with me. I completely admit that I'm in the position I am today because for many years, because of all of the effort it took just to get there that day, I would have said forget it, but did I mention that on that same morning, my wife and other daughter were in the Children's hospital of Boston where my 1 year old is recovering from her 4th major open heart surgery in her very short life?  She was born with a completely messed up heart and I made a promise to her that now that her "unfixable" heart was in fact now fixed, I will do my best to make sure I don't take the perfectly good heart I was given for granted.  So yes, I walked it – the whole damn thing – went through about a half a pack of cough drops along the way and coughed plenty.  I did my best to stay out of the runners' way and cheered others on the best I could – I saw many people at different points in their journey – many in a similar place to me, others at the top of their game, and everywhere in between, but I was inspired that day and will not let your self-righteous attitude take that away from me.
To the family on the bus – I'm pretty sure I got more out of that 5k than the three of you did put  together – by the way, you got a fleece too and for the record mine doesn't fit so it wasn't for the fleece, and the last I checked, I don't think your  9 - 10 minute per mile pace for a 10k race is going to win you many awards either (that said, I would kill to be able to run that pace at this point, but I will someday again soon) -  so I guess the same could be said for you – what really did you get out of it that I didn't?  But you see the difference is, I'm not judging you, or I guess at this point I am a little – but I was actually admiring you until I saw/heard the diarrhea spew from your mouths.  I plan to keep my eyes open for you at events in the future and the next time, I vow to not bite my tongue – we are all at different points in our journey – its people like you that make those of us trying to turn things around feel awkward and scared to try.  But there is a movement out there of people like me that are, despite people like you, taking their lives back (some of us go by Do-lifers) --  I wasn't going to say anything, but it has been eating at me since I got off that bus that I didn't put you in your place and after reading something  John Larson of Team Ortho wrote congratulating all of the runners/walkers,  I had to say something because the fact that he said walkers reassured me that we, too, were in fact welcomed at the event.   I urge others like this family that see people like me at these events as a burden to instead be inspired that we are not giving up.  We need all of the help we can get.
Despite the family on the bus, I thought it was a wonderful event and I'll see you at the 7k in March!!
Posted by rdelaney at Monday, January 02, 2012