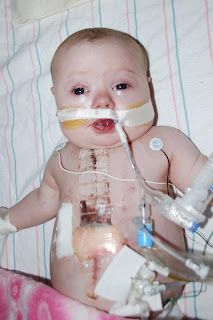 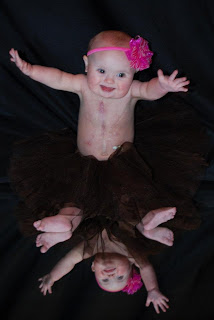 A year ago today, Valentine’s Day 2K11, we found ourselves back in the hospital for Gracie’s 2nd heart surgery for an emergency shunt revision.  The first attempt that day didn’t work, so they had to put her back on the heart-lung bypass machine for a second time to give her an even bigger shunt.  We thought she was on her way back to her room soon, when in fact, they were just starting the second attempt – That night was one of the hardest/scariest nights of my life.  Carrie and I were sitting in Gracie’s room in the cardiac intensive care unit – Carrie was on the couch passing the time on her laptop and I was sitting in a chair flipping through the channels – In the middle of the room there was a large empty space surrounded by machines where Gracie’s bed had sat prior to wheeling her away for surgery.  The wall coming into those rooms are essentially one big glass door – they accordion swing wide open to get the bed out, so when you sit in the room while surgery is going on, it’s kind of like sitting in a three walled room designed for a TV sitcom – and with just as much of an audience because everybody that walks by knows that something’s up when the doors are wide open and the bed is gone – I spent the evening in that chair watching TV and exchanging no need for word “thank you’s” with my eyes and head nods to the people walking by looking in at us with their own no word “I’m sorry’s and we’re praying for your child”.  It was a very long day considering we had no idea that she’d be having surgery that day.  At one point someone stuck their head in the door and told us that she was off-bypass.  We could finally breathe those first breaths of relief - Only a heart parent can understand what it means to hear those two words “off-bypass” when your child’s heart is stopped and a machine is keeping them alive while the surgeons cut and stitch on their tiny body.  After hearing that, we were able to relax a bit and send out the usual happy texts to family and friends waiting for updates, etc – after quite awhile of sitting there talking about how she had done it again, etc – we couldn’t figure out what was taking so long, we figured at any minute they would be asking us to step out of the room so they could wheel her back in and get her all situated with chest drain tunes, dozens of machines and meds, etc., but instead, a nurse practitioner came into the room and told us that after coming off the bypass machine, her blood saturations started to plummet and that they had to put her back on and attempt to give her a bigger shunt – It had been a long time since we had gotten the good news from the other person that she was off bypass, but the first we had heard of this – we thought everything went great and she would be back very soon – instead, out of her mouth came the words I will never forget – “If it doesn’t work this time, there is nothing more surgically we can do, and you need to consider whether you want to put her on life support or not (Ok, now that I think about it, I don’t know exactly how she said it – but you get the idea).  I will never forget how I felt at that moment - I’d run into some pretty big guys as a running back and wedge breaker in college, but I can honestly say, I had never been hit so hard in my life!  There were no tears at that moment – just complete shock – I was numb – all I could do was think about what I could do to help Carrie and Lylli if something happened to Gracie.  Another part of me was very angry at the hospital - wondering if they would be saying this to us if Gracie didn’t have Down syndrome?  Thank God, eventually, late into the night, we got to talk to the surgeon and everything seemed to work out.  I believe it was during that stay that we sent updated echo and pictures to the doctors in Boston and we got the news from them that they thought they could fix her.  Since then, she has undergone 2 surgeries and a cath procedure in Boston – she still is a pretty sick kid and has a long way to go, but she is getting better every day and we are very hopeful that the worst is behind us.  Valentine’s day will now forever be a day where I remember how precious life is and remind me to be thankful for every single moment that I get with my kids.
Posted by rdelaney at Tuesday, February 14, 2012