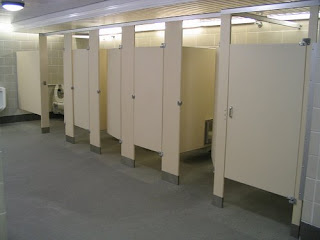 You know the accoustics in the office restroom are very interesting. They don't pump in the same white noise as they do in the rest of the office so when you sit in a stall you become extremely sound sensitive. Its nothing to hear someone texting they're girlfriend from three stalls away. But the guy that I have a problem with is the guy that I'll call the ninja. We've all ran into them - you sit in the stall next to some guy and as soon as you get ready to do what you had planned to do in there -- he decides to stop still in his tracks and pretend he's not there by not making so much as a peep. Your first instinct is to think to yourself -- ok, he was in here first, so you will follow suit and wait him out -- so then you both sit there in absolute silence until you realize that he has also decided that he will not finish until you are done. Normally I don't care and sometimes push even harder to make things louder as I get a little internal chuckle by making my neighbor uncomfortable, but today - I decided I couldn't wait -- got self conscience about the noise and found myself reaching back and timing a flush at the exact time of the noisiest portion of my transaction. I guess I assume that if a persons feet are facing the door, that they are doing the same thing in there as I am and there's no need for these silly games.
Posted by rdelaney at Wednesday, August 05, 2009