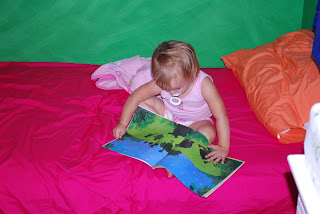 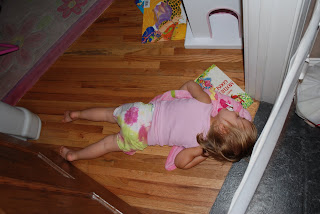 Saturday was a big day/night in the Delaney household (oh how times have changed).  Since Carrie doesn't start teaching again for a few weeks and life will most likely be chaotic when Gracie arrives, not to mention, probably the biggest reason, that we only have one crib -- we decided that it was time for Lylli to start sleeping in a bed.   We went to Target and let her pick out sheets, a blanket, and pillow case.  When we put her down for an afternoon nap, I went and bought her a twin mattress.  Later that day, we took the crib out of the room, rearranged a bit and setup her new bed - Actually at this point, we just put the mattress on the floor, which based on the thud we heard when she eventually slept in it, it was a good decision to start this way.   We have a retractable gate on her door that we use to keep the dogs away when she is playing in there, etc.  This gate is a livesaver these days, because its nothing for her to open the door.  Anyway - Bedtime was a challenge.  It took many attempts of setting her in her bed, closing the door and walking away -- only to have her two minutes later open the door and cry at the top of her lungs -- I think she was less scared and sad, then she was exploring the fact that she was not locked into a crib for the first time in her 22 months (although I know for a fact that she could anytime she wanted, climb out of the crib, we fortunately never had it happen).  After about an hour of trying to get her to sleep she finally quieted down.  Escited to see how things ended up, I tiptoed down the hall to take a look -- I had just left the bright living room and her room was dark, so I was having a tough time seeing her.  As I leaned in over the gate to get a better look, I heard a little sigh at my feet.  I called Carrie over -- she took a picture.  See the attached BEFORE and AFTER pics.  We were able to eventually move her to her bed where she lasted several hours until she wanted to come into bed with us.  Quick update to the story -- I came home from work on Monday and she was so excited to show me her new bed and night number three saw a little less crying and screaming out the door, but I will admit we were still second guessing our decision a bit.  But I am very happy to report that last night, night #4, she barely whined, never opened the door and then slept until after 6 this morning!!