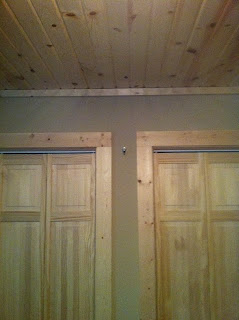 If you look closely in the middle of this picture, between the two closet doors, you’ll see “The Hook”.  I put this hook up in my bedroom a couple months ago so I see it in the morning when I wake and just before I go to sleep every night.  My wife cracks up laughing when she looks at it because I was nervous to not put it too low where someone could hit it –  OK, so I admit, the odds are pretty low that someone’s eye would ever get too close to it to have to worry about that.  That said, you’ll be happy to know, I put it high enough to assure that this could not happen anyway.  I’ve laid out strict rules for the hook – It’s never to be used for a bath towel or robe or anything else besides a medal that I get for finishing a marathon (although I may hang a ½ marathon medal on it if I do one, but only as a placeholder because at this point that in itself will take a lot of work for me to accomplish).  I haven’t told her yet, but I’m thinking about putting vinyl letters in the space between the closets that say “Do Life.” Wonder what she’ll think about that idea?  Regardless, I will hang a marathon finisher medal on this hook before I turn 40 in September of 2012!!!
Posted by rdelaney at Wednesday, August 31, 2011